Since 2011, we have been developing a long term investigation based on Edgar Allan Poe’s short story entitled “A descent into the maelström” (1841). Using this tale as a conceptual tool to challenge narratives of adaptation to environmental threats, we have led a series of field researches and explored through multiple forms and formats – such as editions, installations and public situations – the past and future resonances of this story.

Evoking of the fate of three brothers caught in a gigantic maelström (whirlpool) in the North of Norway, Poe’s tale has often been used by thinkers and theoreticians to conceptualize the dynamics of interdependence between humans and their environment (both social and ecological) in a situation of imminent danger. In particular, it allows to understand how people trapped in a vicious circle can deepen the perception of its dynamics, drawing out of observation new practical and emotional resources to avoid catastrophe. In the tale, one of the fishermen manages to overcome fear and observe all the other objects caught with him in the maelström, deducing a causal relation between their shape and the speed of their descent to the bottom of the whirl. Understanding that a barrel can serve as a more suitable vehicle in this context than a boat, he thus finds the way to escape his dreadful fate.
Sociologist Norbert Elias, media theoretician Marshall McLuhan, illustrator Fritz Eichenberg, theoretician Gene Ray, environmental historian Grégory Quenet and more recently philosopher Bruno Latour, among others, have referred to the allegorical potentialities of the story as a way to conceptualize the major challenges of their own historical periods.

Considered as a tool, Edgar Poe’s tale requires to be carried, displaced, activated. Furthermore, it allows to gather new narratives, constituting a fiction «carrier bag» (as writer Ursula Le Guin puts it), that challenges the perception of environmental changes and adaptation issues. This process has already been experimented on several occasions: In 2013, we were invited by the Mercosul Biennial to research on the floods history in Porto Alegre, and its numerous social and environmental implications, while in 2014-2015 we pursued the investigation on the site of Poe’s tale itself, in the Norwegian High North, a region that is currently at the vanguard of numerous controversies regarding the development of the oil industries in the Arctic. Both times, this process led to the production new models and narrative fictions, as well as to various forms of public activations, by the means of art installations, performances and publications.

Those early developments have constituted a rich and diverse corpus of narratives/testimonies and models/diagrams, which requires both to be activated in local situations and to be extended by the collection of new material. After realizing an investigation residency in Porto Alegre for the 9th Mercosul Biennial in 2013, and developping a series of performances at Théâtre de l’Usine following our trip to the Lofoten islands (on the site of Poe’s tale, in the Norwegian arctic) in 2014-2015, we launched at the Museu de Arte Contemporânea de Niterói in August 2016 the beginning of a new series of installations entitled « A tale as a tool », that will progressively take place in various locations, such as the Gallery G-MK in Zagreb in Octobre 2016, and the Centre de la Photographie de Genève in 2017. Staging a specific selection of documents and sound extracts in each different locations, these installations are meant to host a series of public events such as lectures and collective reading sessions, questioning the perspective of an invisible catastrophe which requires to build new relations and shared concerns between remote areas of the world. 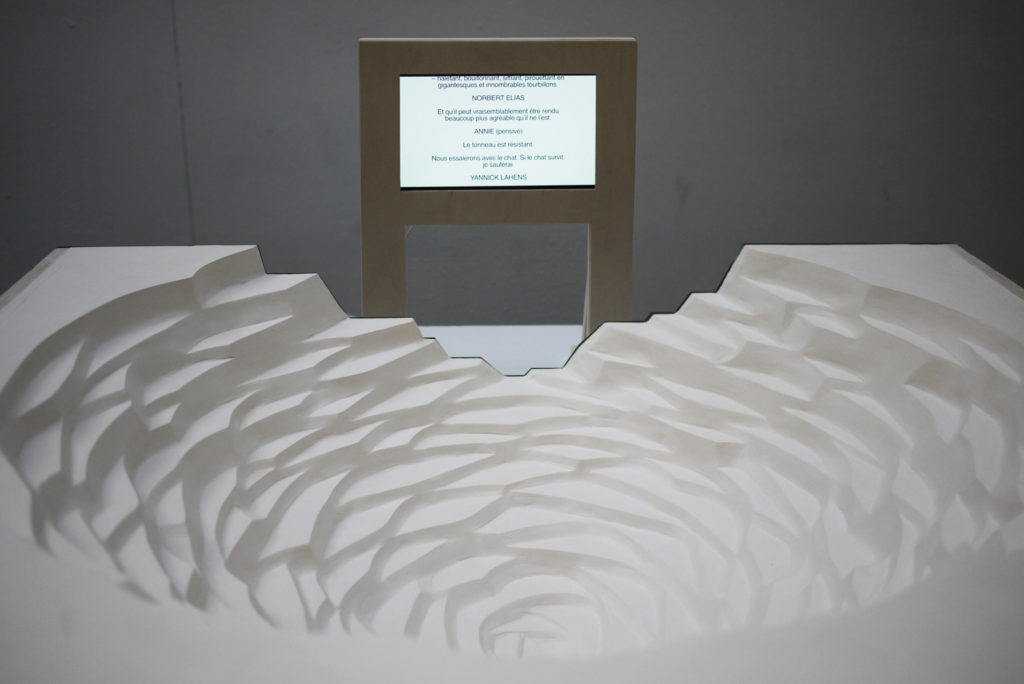 Initially presented in Basel in 2011, the first configuration of this project earned Aurélien Gamboni a national award. One year later, the collaboration with Sandrine Teixido was initiated at Espace Arlaud in Lausanne, where the tale by Edgar Allan Poe was translated into a fictional architectural assembly… 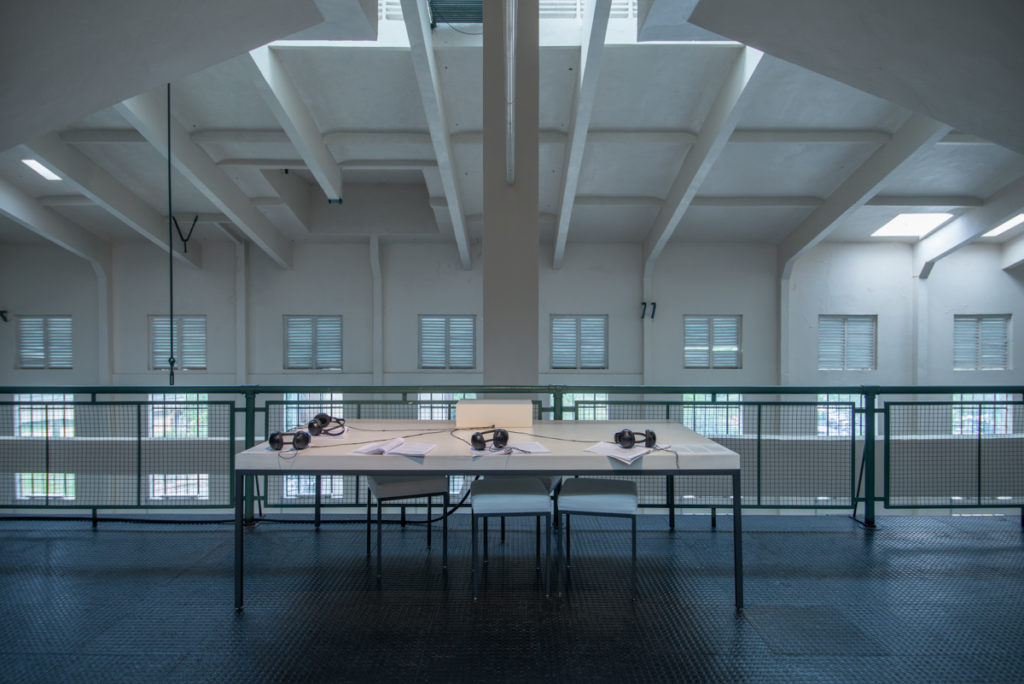 In 2013, Gamboni and Teixido pursued their exploration of the maelström through a series of investigation residencies in Porto Alegre. They collected numerous testimonies that shed light on the inhabitants’ complex and diverse relationships with their natural environment, more specifically in relation to the spectacular floods of 1941. 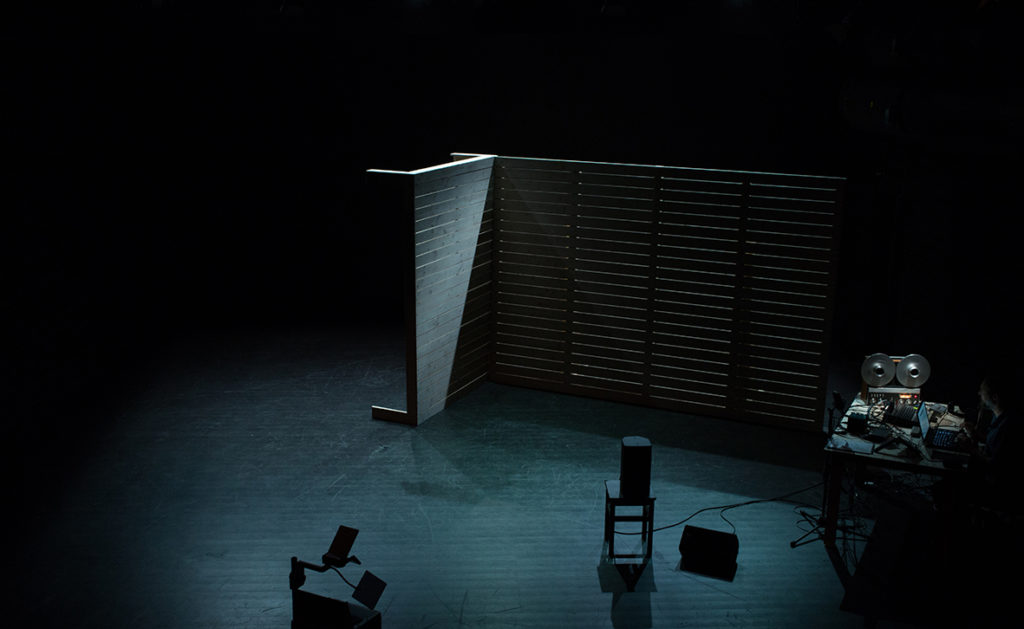 After having adapted and expanded the maelström tale so that it could find in each context a new agency, the next step naturally consists in carrying it back to the site of the plot itself: in the Lofoten archipelago, on the 68th parallel North, a place that Edgar Poe himself never visited. Structured in two parts… 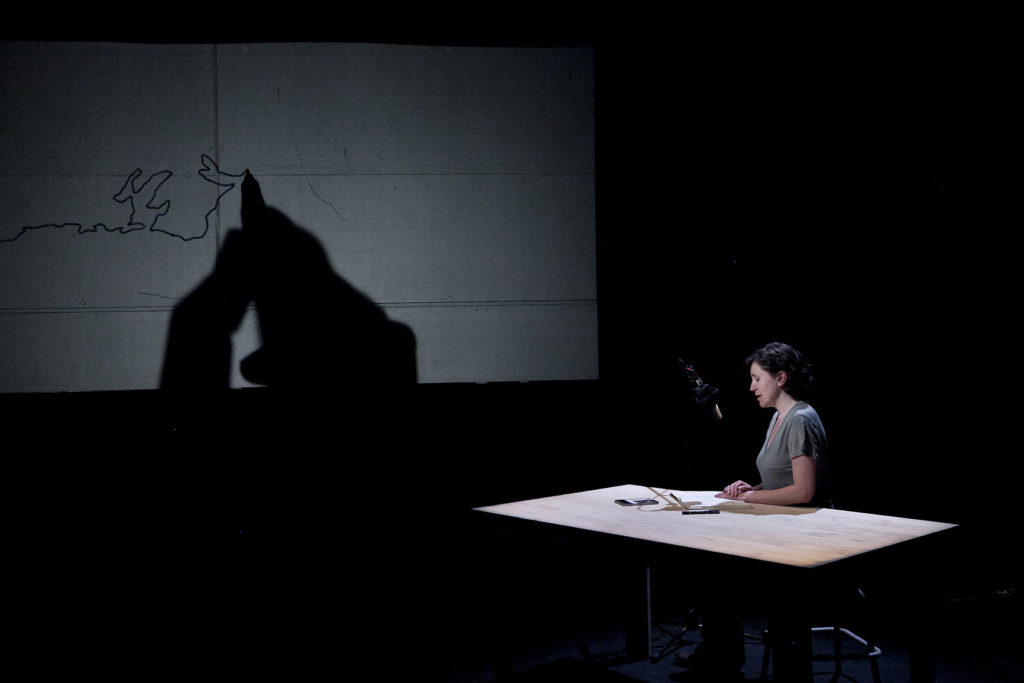 Following the investigation on the tracks of Edgar Poe’s maleström in the Norwegian High North, the second part of M68N staged the narratives and testimonies collected in the Lofoten islands: seismic surveys and oil controversies, killer whales fleeing from the fjord, Sámi dreams and local knowledge, Gulf Stream, climate change and arctic identities…

Can the maelström help us to experiment new forms of assemblies around shared issues? Initiated for the exhibition “La Bête et l’adversité”, “Hellsegga Talks” intended to pursue the investigation in the context of the exhibition itself, with an installation meant to be activated by a series of public discussions. 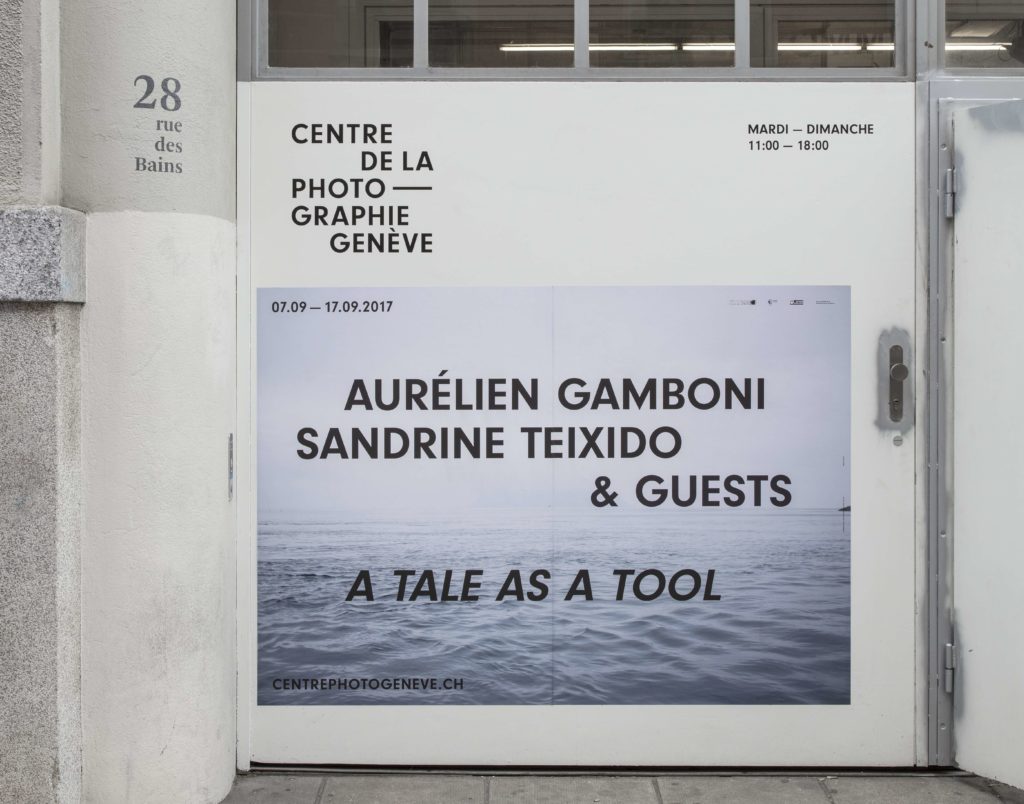 A tale as a tool – Geneva

After a brief step at gallery G-MK in Zagreb, the maelström settled at the Centre de la Photographie in Geneva in September 2017,with an installation combining photographic documents, investigation narratives, video projection and drawings. On a 60 meters long shelf, runing across the whole exhibition, were presented 80 extracts from the testimonies collected. In the […] 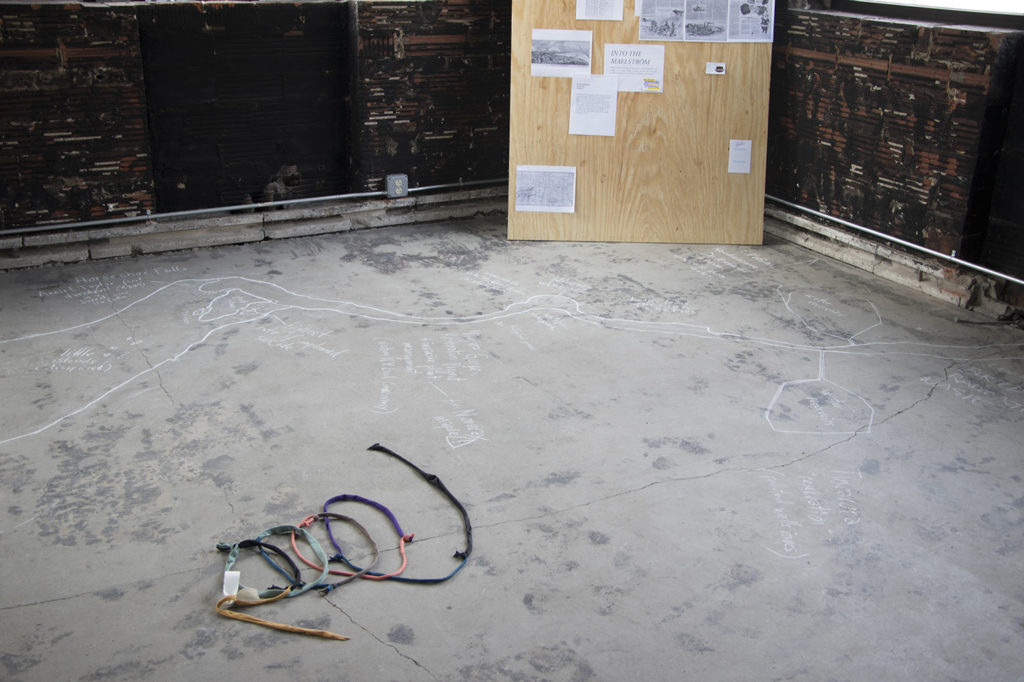 A tale as a tool – Buffalo/Niagara

Invited by the Techne Institute of University at Buffalo (UB), Sandrine Teixido and Aurélien Gamboni developed with independent curator Stéphane Verlet-Bottéro an «investigation office» for the Indeterminacy Festival. During this research residency, they explored the past and present environmental transformations in Buffalo and the Great Lakes, close to the famous Niagara Falls that inspired Edgar […]

The Geneva-based artist Aurélien Gamboni develops a practice of critical investigation leading to multiple forms of installations, texts and lectures-performances. After having developed a long-term inquiry on The Conjurer by Hieronymus Bosch and the “ecology of attention”, he started with Sandrine Teixido an investigation on Edgar Allan Poe’s “maelström” and the cosmopolitics of nature. Aurélien Gamboni is a former co-curator of Forde independent art space (2006-2008), he took part in the artists and researchers collective Save as draft, working on the representations of climate change, and he currently contributes to the research project The Anthropocene Atlas of Geneva at Geneva School of Art and Design.

Sandrine Teixido is an author, researcher and artist living in Rio de Janeiro and Paris. She created the association Le Monde en Critique in 2009 and the publishing project ISSUE in 2015. She is Music curator at the ‘New Patrons’ initiative supported by Fondation de France, and holds a PHD in ethnology and social anthropology from Centre Georges Simmel at EHESS, in Paris. In collaboration with artist Aurélien Gamboni, she has had various artistic interventions at the 9th Mercosul Biennial in Porto Alegre (2013), the Théâtre de l’Usine in Geneva (2014-2015), the MAC Contemporary art museum in Niterói (2016) and the Centre de la Photographie in Geneva (2017).

Don’t hesitate to contact us if you wish to receive regular information or contribute to the investigation.